Another week, another dinner session. Join us for an inspiring evening carefully balancing delicious food and pleasant tunes into the night.

Inspired by artist Gordon Matta-Clark’s restaurant FOOD, which existed in the 1970s in New York, The Grey Space invites people to come and cook affordable meals as an artistic and social expression during our weekly Dinner Sessions. DJs will guide the evening musically and make you dance after dinner.

For this Sunday’s Dinner Session, familiar face Inari returns to the kitchen, and he brings Erika Hirose (of miso brewery WAKEAT. in Rotterdam) with him this time. Their dishes are accompanied by the tunes of the The Hague-based Kip Killah.

Erika and Inari prepare a menu with miso in every course, thereby calling it Miso Night. They serve Miso Gado Gado, Saoto Miso Soup, and end with Banana Lumpia with Miso sauce. 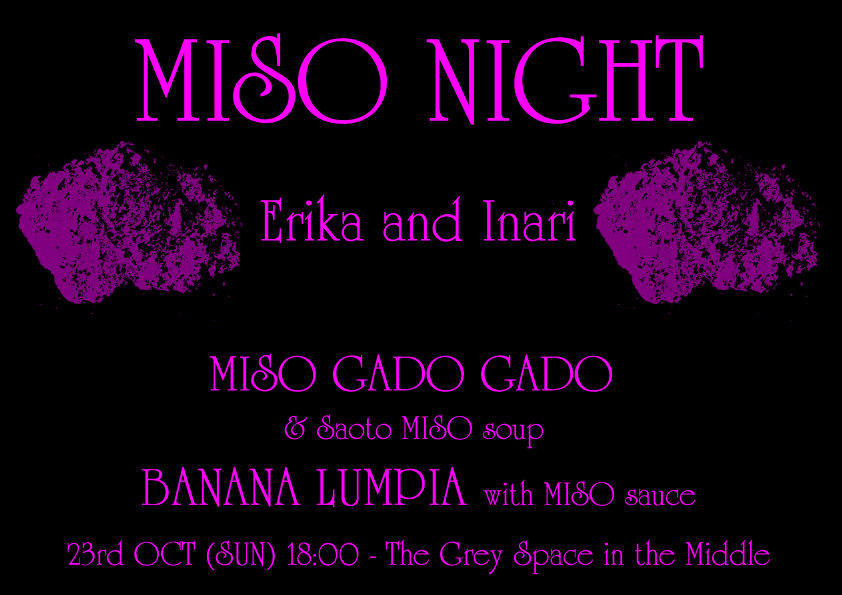 Erika Hirose, originally from a small Japanese countryside town, has had a passion for traveling since she was little: from hitchhiking around Japan to traveling globally. This way, she realized the role of food in creating a strong connection between people and nature. Now, Erika has established a craft miso brewery WAKEAT., using her family’s traditional Japanese methods and bridging local European ingredients.

Originally from Japan, but now-Rotterdam-based artist Inari (Yoshinari Nishiki) explores the entanglement of economics and ecology in his work. Recently, he has developed a special interest and focus on invasive species, which pose a mode of existence of resource that is abundant in this ever finite era. For example, Inari has created an energy drink ‘EROI’, from invasive Japanese knotweed.

DJ Kip, a moniker belonging to Martijn Verlinden, is the founder and label manager of Antilounge Records. He started spinning in 1992 and began producing music in the early 2000s. He does not sit still and is active as a producer under various names, released two vinyl records last May, is both initiator and teacher of Beatlab workshops, and is the founder of Index Music. Furthermore, he has a two-monthly radio show on Radio Tonka and is a member of the jury for the national Popronde. For this Dinner Session specifically, Kip will play jazz in its broadest sense: from old-school bebop to new corners and crossovers.

For our Dinner Sessions, we’re always looking for cooking enthusiasts, artists, or other humans with a passion and talent for food. Feel welcome to reach out to us! Some experience with preparing food for – and serving to – larger (30+) groups is required.